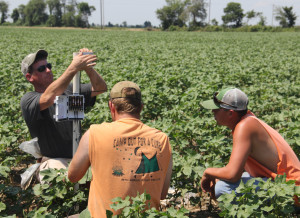 In agriculture, timing is critical. Often, it rests in the hands of Mother Nature, whether it’s rain that falls shortly after sowing seeds, or a chance dry period just before harvest.

Joe Henggeler, irrigation scientist at Fisher Delta Research Center, is investigating wireless technology to inform farmers of the optimum time to irrigate their cotton fields—providing control of the one of the most critical management variables in growing crops.

Cotton yields suffer if too little, or even too much, water is applied. Data from the annual Bootheel Irrigation Survey shows nearly 10 percent of the time, dryland (non-irrigated) cotton yields as much or more than irrigated fields, so significant yield gains can be made by optimal irrigation timing. Missouri ranks ninth in cotton yields in the U.S., and the industry generates nearly $200 million annually.

Through a partnership between Fisher Delta Research Center and Cotton Inc., Henggeler is investigating wireless soil moisture sensors at four depths in the soil profile. This smart-scheduling irrigation method looks at the actual amount of water in the soil that remains available to the plant, as opposed to estimated amount, which is based on computer programs using weather data. “The actual data is an eye-opener for farmers; they had thought that their irrigation system was applying one inch to the soil at every pass, but found out that it was less than half that,” Henggeler said. The wireless system, using real not estimated information, conserves resources, can boost yields and can save farmers money.

Henggeler developed best management practices to install the wireless systems, including collecting a soil sample at the time of installation to determine soil texture and permanent wilting point—the minimal amount of soil moisture required for a plant not to wilt—so irrigation can be triggered by the percent of total available water. 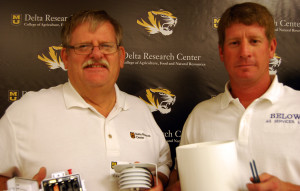 In the first two years of the research, Henggeler has also found that monitored sites on a pivot-irrigation system could be reduced from three to one, cutting the investment cost in half to less than $5 per acre, per year. Several area farmers have installed the sensors and are collecting soil moisture data, sent to a website from the field locations.

Farmers can view soil moisture graphs on their computers or pull up the information on their smartphones from the field. The monitored cotton fields are currently being picked so final results aren’t available, but the monitored corn field in Charleston yielded 252 bushels per acre.

“Missouri is becoming one of the leading states in wireless irrigation sensing,” Henggeler said.  Farmers cooperating in the research reported yield boosts in their plots with wireless sensor scheduled irrigation.

Below Ag Services LLC in Parma, Mo., now sells and installs the technology. Henggeler said a local dealer is critical for the long-term success and growth of wireless sensors for irrigation.