The group, led by Grover Shannon, releases four to six new varieties into the market every year – and they just got a whole lot stronger with a key addition.

Pengyin Chen, a soybean breeding and genetics professor at the University of Arkansas, has joined the Fisher Delta Research Center, accepting the MU Division of Plant Sciences David M. Haggard Endowed Professorship of Soybean Breeding. Chen will replace Shannon as the head of the program, although Shannon will stay on in a part-time role to help with the transition.

“What you’ve got in Pengyin is a man with outstanding credentials,” Shannon said. “He’s well-known worldwide. He’s an excellent mentor and trainer of students. He’s farmer-friendly and enjoys working with all farmers. He knows what he’s doing. His track record speaks for itself.

“He’s going to be excellent. I don’t think people even understand how good of a job he’s going to do. I’m excited.”

“I feel so fortunate to have this opportunity,” Chen said. “Grover has one of the top programs in the nation, with great support all around. I told the farmers in the Missouri Bootheel that I’m excited to help them. I’m very receptive to any input that they have.”

“We’re extremely fortunate and proud to have attracted someone of Pengyin’s caliber to join our division and our college,” added Jim English, director of the Division of Plant Sciences. “I’m confident that in short order, he will become an important player in the continuing success and growth of MU’s soybean breeding program.”

Shannon and Chen have collaborated on several projects since Chen joined the University of Arkansas in 2001. Their relationship goes back much farther than that, however.

The duo met in the late 1980s, as Chen was finishing his Ph.D. at Virginia Tech. 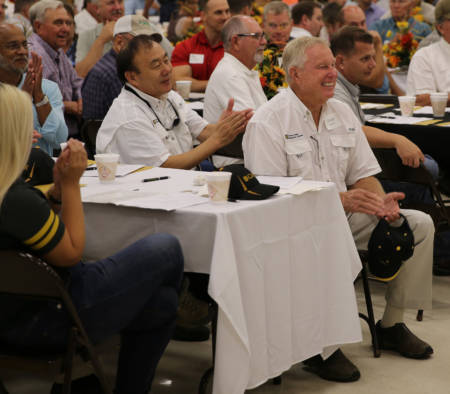 “Our relationship goes back a long time ago, when I was first getting into the soybean business,” Chen said. “We met during the annual soybean breeder’s tour. He turned out to be a great mentor. He was very personable, friendly.

“Over the years, he kept encouraging me to learn as much as I could and strengthen my technical skillset. He was a big supporter of my career every step along the way.”

“We’ve done a lot of things together,” Shannon said. “We have a lot of joint research together, much of which focuses on high-oleic soybeans.”

Shannon has been working with soybeans for 40 years. He received his Ph.D. in genetics and plant breeding from Purdue University in the early 1970s after receiving his undergraduate degree from Mississippi State University. He began his career at the Fisher Delta Research Center in 1974. After stops at other locations, Shannon has been back at Fisher Delta for the past 20 years.

“My heart has always been in soybeans,” Shannon said. “There are great people down here. I’ve been working in soybean breeding for 40 years and released around 100 lines in my career. I’ve been very fortunate to have good people around me to help.”

Chen also has a great relationship with another Mizzou soybean breeder – Andrew Scaboo. Scaboo earned his Ph.D. in plant breeding and genetics from the University of Arkansas, studying under Chen.

“Pengyin really cares about his students,” Scaboo said. “He has a long history in the public and private sector of education and training. He’s also strong in variety development. A lot of his soybeans are being grown by farmers across the country.”

Chen was born and raised in north central China. He was reared in a small farming community.

“I grew up on a very small farm in a very tiny village of 192 people,” Chen said. “I was involved in wheat, corn and cotton plantings. I grew sweet potatoes, peanuts and peaches myself. I had a goat, a sheep and pigs. 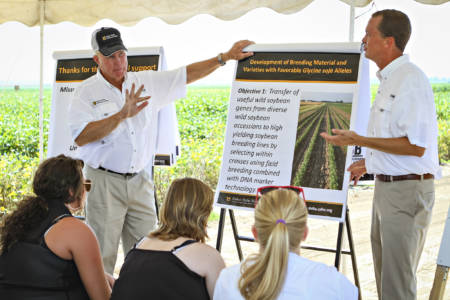 After Chen graduated from high school, he was selected to teach biology and English to middle school students. He then went to college in China.

“I was assigned to a college; it wasn’t your choice back then,” Chen said. “I attended the Northwest University of Agriculture. They did nothing but agriculture. We only had 2,000 students then, we now have 34,000.”

After earning a Bachelor of Science degree in agronomy and a master’s degree in plant breeding, Chen taught at the Northwest University of Agriculture for two years. His career in the United States started shortly thereafter.

“I transferred to the U.S. because I was trying to get my family here, my wife and daughter,” Chen said. “I started my professional pursuits at Iowa State University, studying corn genetics. I was a corn breeder at the time. I worked there a couple years and then transferred to Virginia Tech. At that time, I switched from corn to soybeans.”

“The opportunity to study under Glenn was outstanding,” Chen said. “I’m very thankful that I was able to work with him.”

After a couple of years working in Texas, Chen returned to Virginia Tech as a research scientist working on specialty soybean development.

After 10 years in that role, Chen continued his outstanding career at the University of Arkansas.

While Chen has worked with several crops throughout his career, soybeans are at the top of his list.

“Soybeans are a very important crop,” he said. “It’s an oil crop that has protein for humans and livestock.

Chen’s main soybean research at the University of Arkansas focused on conventional variety development with high yield, pest resistance and stress tolerance. Chen’s primary focus is to improve the quality of soybeans.

“He’s developed a lot of good soybeans,” Shannon said. “He’s worked with a lot of different soybeans, including ones that are drought tolerant, high protein and some that have improved digestibility for livestock and poultry.”

Along with his research, Chen trains students and is heavily involved with seed companies to promote and market new soybean varieties.

The University of Missouri has worked hard to put together one of the largest soybean breeding programs in the nation, as far as public universities go. 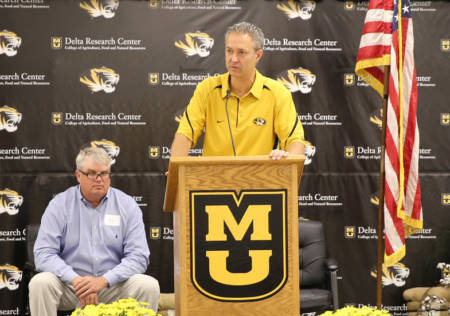 Shannon has played a huge role in that emergence – and he’s happy to see where Chen takes the program.

“He’ll come in and take MU to new places,” Shannon said. “I’m looking forward to helping Pengyin in the next year or so. I think the next few years are going to be wonderful. He’s going to bring a new perspective to what we’re doing.

“We’re excited to have someone of this caliber to lead our soybean breeding program.”

Chen added that he’s also excited to take the reins of the program, and he’s excited to continue his learning, as well as work with someone he looks up to.

“I’m an old kid on a new block,” Chen said. “I think I have enough gas left in the tank for another good run. I’m extremely excited. This is a new chapter of my professional career.”

“Pengyin is being humble when he says he may have another run in him,” said Trent Haggard, director of the Fisher Delta Research Center. “He keeps a very busy schedule, is very organized, professional, detail oriented and high energy. We are very excited about the interactions we have had with him already. Pengyin will inherit a powerful team that Grover put together. The talented team has worked together for years and has also known Pengyin for years.”