With technology ever changing, University of Missouri Extension professor Gene Stevens knows how important it is to keep up with the latest trends.

Stevens, who is located at the Fisher Delta Research Center in Portageville, Mo., has developed a program to help farmers do just that. Stevens, through MU Research and Extension, has developed the Crop Water Use App which can assist farmers with their irrigation scheduling.

“When I began my career, there was a lot of excitement about using computers in agriculture,” Stevens said. “That was back in the 1980s, when we didn’t have as many tools as we do now. Agriculture has been impacted by technology over the years, but there’s been a lag. With smartphones, it’s a whole new game.”

The focus of the Crop Water Use App is to help farmers keep an eye on the irrigation of their fields. The goal for a farmer who is irrigating his fields is to put the correct amount of water on at the right time and in the right place. Too much water, in addition to a possible rainstorm, can lead to a loss of costly nutrients or reduced crop yield. Too little water can leave a field dry and also reduce crop yield.

The program is both computer and mobile friendly.

“Crop yield is the most important concern for a farmer,” Stevens said. “Keeping track of your irrigation schedule is incredibly important. Once you get behind, it’s hard to catch up.” 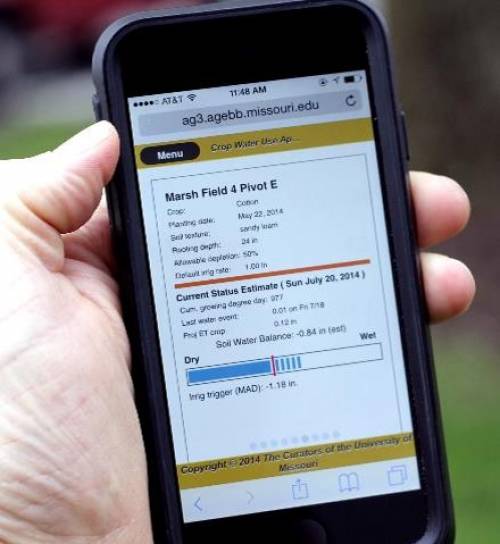 The Crop Water Use App is computer and mobile friendly.

Stevens has always been focused on researching ways to improve production practices for numerous crops, such as corn, rice, cotton and soybeans. His center pivot irrigation research led to an opportunity with the Howard G. Buffett Foundation. In 2010, he traveled to Modimolle, South Africa to do rice irrigation research for two years. While there, he collaborated with scientists from Pennsylvania State University and Texas A&M University who also had projects there.

“The farmers in South Africa are interested in growing rice because the people eat a lot of it,” Stevens said. “Their water supplies are limited, though. By using a pivot, they can use less water to grow rice.

“On the research farm, I was irrigating out of a reservoir and the pumps were not able to run all of the pivots at the same time. Some days, more than one field needed watering. It helped the farm manager to know a day in advance when I would be irrigating my field. With a spreadsheet program, I could tell him projections for the week using historical weather data.”

The group ran into a problem with the actual weather data, though.

“I had to manually key in the weather data from a station that I installed on the farm,” Stevens said. “If I got behind a day or two, it was really hard to catch up.”

That experience led Stevens to start thinking about what tools farmers in Missouri and the surrounding states were using for irrigation – and how MU Extension could make that process easier.

Local farmers have used a couple of methods to keep track of their irrigation. The first is the Woodruff Irrigation Chart. C.M. “Woody” Woodruff developed this chart in the late 1960s as a way for farmers to apply the correct amount of water in the form of irrigation. Woodruff is an emeritus professor of agronomy at MU.

“The Woodruff Chart is easy to use and you don’t have to have a computer or phone to use it,” Stevens said. “It’s a great tool. One negative of it is that it’s based only on historical water use. In 2012, when we had a really high water-use year, it drastically underestimated irrigation.” 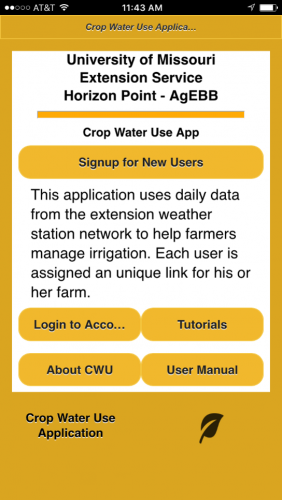 A screenshot of Crop Water Use App on a phone.

Another tool is the Arkansas Irrigation Scheduler. The tool was developed by a team that included Earl Vories, a professional engineer with the United States Department of Agriculture Agricultural Research Service in the Cropping Systems and Water Quality Research Unit. Vories is also an adjunct professor in biological engineering with MU and works at the Fisher Delta Research Center as well.

“This is another great tool for irrigation,” Stevens said.

The Crop Water Use App incorporates pieces of both tools, just with a 21st Century flair. The program is based on web pages instead of being an actual app that has to be purchased through the Apple store. The web pages can be bookmarked on a farmer’s computer or phone.

Stevens also utilizes the Missouri Mesonet, the agricultural extension weather station network, which offers real-time weather updates throughout the state. The weather data is more up to the minute than some other programs.

“A couple extension services in other states have similar programs,” Stevens said. “One guy told me that he wished he had started with our set-up, mainly because farmers would not have to update their phones when he made improvements in the app.”

The process for registering for the program is very user-friendly.

“A farmer just needs to go in and set up the soil information at the beginning of the year,” Stevens said. “Once you do that once, you don’t have to do it next year. We have to know the latitude and longitude of the field to get the correct rainfall information. We use the National Weather Service (NWS) rainfall grid for rainfall. For evapotranspiration calculations we use our extension weather stations in Missouri, so that is a big plus.”

A farmer can even override the rainfall totals with his own farm rain gauge measurements if they received a different amount than the NWS shows.

Farmers then just need to enter the irrigations that they make.

Stevens’ need to plan irrigations ahead in South Africa is evident in the app today.

“For a farmer, if you want to get out and travel with your family one weekend, you can click the Farm Summary button in the app and figure out in advance which fields will need irrigation,” Stevens said. “If you’re scheduled to irrigate on Saturday, maybe you do that Friday so it’s taken care of.

“We tried to make it as easy as we could for farmers. We’re really just trying to help farmers stay on top of their irrigation.”

The program also includes online tutorials and a user manual. The project is funded by the Missouri Cotton Research Board and a Conservation Innovation Grant from the United States Department of Agriculture Natural Resources Conservation Service.

The program can be used on multiple crops and has been available to growers since 2015.  Last year, 398 fields were irrigated with the program.

“We would encourage farmers to register prior to this spring,” Stevens said. “You can use Google Earth to find your farm and then you can enter in your soil information. You can add the soil texture or NCRS mapping unit in there as well. During the spring, you put your planting date in along with your plans. It’s as simple as that.” 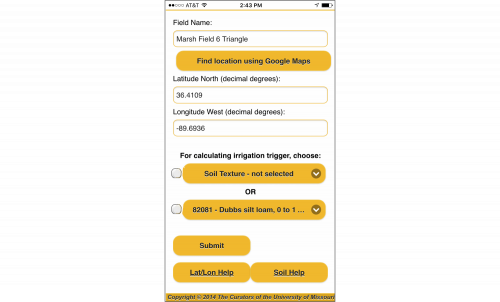 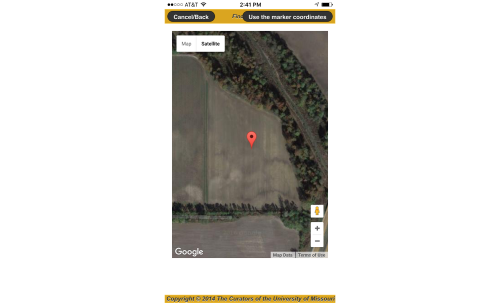 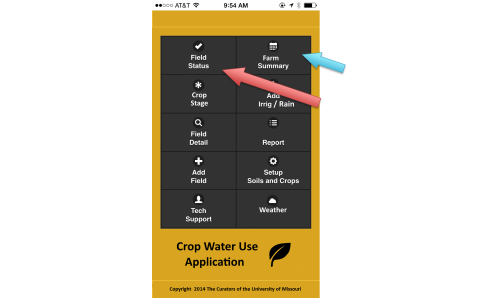 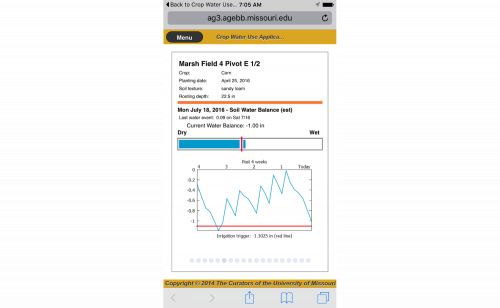 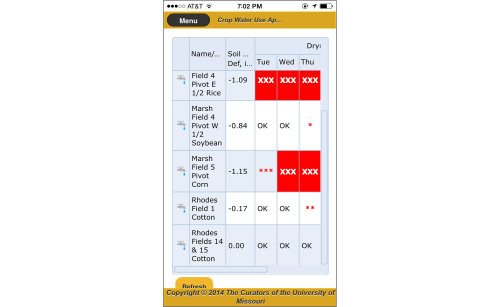 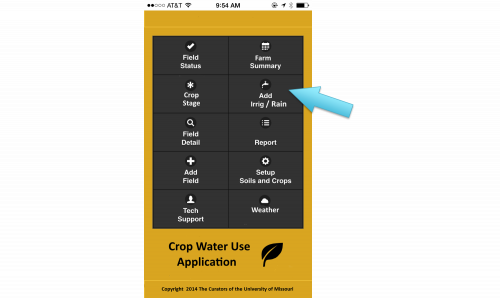 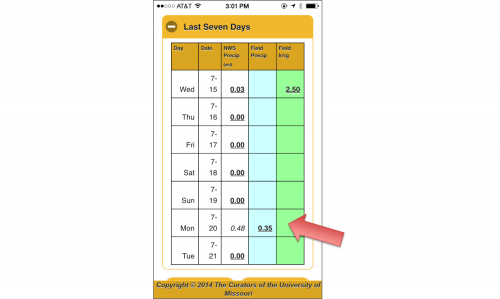 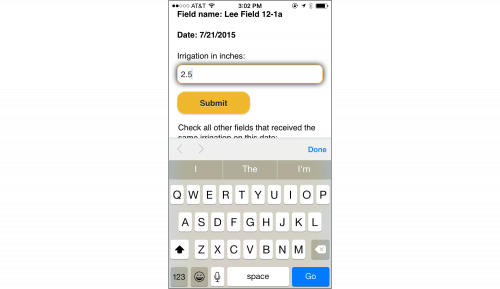